Send Flowers or Gifts To 200 Countries

The Parishioners have complained to the Kilkenny Journal saying that they are going to petition the new Bishop of Ossory, Dermot Farrell, to remove this insulting priest from their midst.

There was no consultation whatsoever, not even with his own local diocesan authorities. Fr. Purcell’s inflammatory statements came right out of the blue, taking the hierarchy unawares and sowing seeds of bitter discontent in the local catholic community.

There was also talk of large bottles of Scotch being bought in for the  St. John’s priests’ house  every evening from the local Dunnes Stores and some well meaning people attributed the priest’s outburst to the newspaper to that, unable to process the treason.

Whatever, it is felt that Fr. Purcell deserves a rest. People are still shattered from his outburst. And in fact they are never racists but 1,300 local parishioners who signed an objection to a proposed mosque for their estates based on traffic problems mostly.

And though Fr. Purcell forces religion into the issue,  declaring  that Jesus supports the mosque, none of the objectors have ever said anything about religion at all. Nobody has breathed a word about race either – except Fr. Purcell  himself.

The acknowledged leader of the campaign against the construction of the mosque on the site that it is proposed for, Eugene McGuinness (younger brother of Deputy John McGuinness), made the following reply to Father Purcell’s admonitions via the Sunday media. 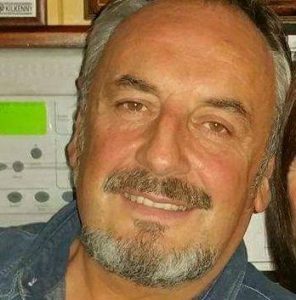 “It is indeed sad when you see that once again the race card is been raised, by none other than the Parish Priest of St. Johns Parish in his comments relating to our legitimate objections to a development on the Hebron Road.

“Sad because when you read his comments it is apparent the good Father hasn’t even done us the courtesy of reading our objections and as such, has little understanding of the difficulties facing these communities day after day, week after week.

“For a Parish Priest who doesn’t understand or hasn’t listened to the concerns of his own Community speaks volumes, a sad day for religion and maybe another indication why church numbers are dropping so dramatically year on year.

“Had Father Purcell read our submissions he would have seen that religion was never mentioned, nor should it be, as it is not a legitimate reason for objection. We have said time and time again that we believe the Islamic Community are entitled to their mosque, but it must conform to all planning regulations, as would any development.

“It is because of the traffic/parking issues on the Hebron road/Bishop Birch Place that we believe this site to be totally unsuitable. Our concerns are legitimate, well researched and lodged as part of the planning process.

“It is in fact the Iman, Ebrahima Ndure who raises the race card time and time again in an effort to sway public opinion but it’s a fight we are not involved with and wont get drawn into.

“A High Court Appeal would not be a Christian Act” Fr. Frank Purcell tells us, but it would seem that  allowing Kilkenny County Council to trap people in their own homes, as a result of bad planning for hours with no access to the emergency services, is?
Should that emergency become critical and a priest is called, would Fr. Purcell consider it to be unchristian for Kilkenny County Council to deny or hinder access for a priest to administer the “Lasts Rites” because of bad planning?

“Are you seriously suggesting that we drop our objection because “Rome’s Law” takes precedent over Irish Law! It would seem that, just like the last referendum, we like all the yes voters, will have to rush to the confessionary to ask for forgiveness for defending our own communities.

“Unfortunately Father “Rome’s Law” has not served us well and needs to get its own house in order before pointing the “less powerful” accusing finger.

“We who are living the traffic nightmare will peruse all legitimate methods to get our message across and you should apologise unreservedly for suggesting that there is anything racist or unchristian in that endeavour. 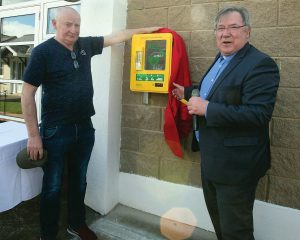 Carlow-Kilkenny Sinn Fein TD sent councillors Kennedy and Tyrrell to the Kilkenny Islamic Centre to assure the Imam of the full support of the local Sinn Fein party for the new mosque scheduled for St. John’s Parish.

Like Malcolm Noonan, Sinn Fein has brushed aside forty paid objections from the residents including Brian Murphy, Chairman of the O’Loughlin GAA Club, and a couple of thousand of signed petitions against, as the work of malcontents, haters, racists and the far right.

However that is not the case at all. The objectors are all long time respected residents of the estates surrounding the site of the mosque – all the people of Assumption Place, O’Loughlin Road,  Ossory Park, Bishop Birch, Hebron Road, Millennium Court, Lakeside stretching over into Newpark. 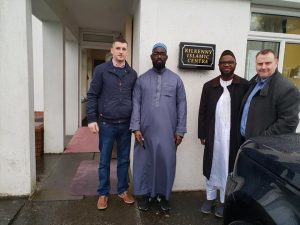 One thought on “Kilkenny Parish Priest Pulls Race Card on His Parish – Claims Jesus Wants a Mosque in his Parish. Sinn Fein Agrees!”

This site uses Akismet to reduce spam. Learn how your comment data is processed.

THIS is what a #SyrianHero looks like, unlike these selfish cowardly "refugees" that sneak to Europe to sponge off our taxes and get free everything!

Had our grandparents fled to Canada, we would be speaking German!
Female YPG Syrian Snipers wear colourful or floral scarves as a big FU to ISIS (although it makes them an easy target).

Taken in 2017 before the war in Syria was over, she was actually smiling in the video because she joked "why did it not hit me" - assuming she is muslim and wanted to be martyred in heaven - although apparently the rewards in heaven are different for muslim women... ... See MoreSee Less

ANGELA RAY : STRAIGHT OUT OF JAIL AND UP FOR ELECTION!

Angela Ray spent Christmas and the New Year in Jail. Before Christmas she was locked up in Kilkenny Garda station. This morning she was at Kilkenny courthouse, this time not to go to jail but to go for the Dail.

Angela was only released from Mountjoy on bail last Thursday, after she had been held in Dochas, the women's prison, beaten up there and held in segregation in solitary. Tough woman? The attractive lady is anything but. She has been fighting Tusla who she accuses of not being fit for purpose and she wants society to get behind her and support her campaign on behalf of all parents who have been treated unjustly with their children taken away from them by Tusla, minister Zappone and the State.

Angela's is a fascinating story, I was there before Christmas the night she was locked up in Kilkenny garda station, another candidate in the election Gemma O'Doherty was there protesting along with anti-Tusla campaigner Dee Wall of Dublin. And if you want to cause them all real pain above in the Dail, Angela is the woman to vote for.
by Michael McGrath. ... See MoreSee Less

Why Are People Too Scared To Vote “Far Right”? How Fine Gael & Fianna Fail Pay The Far Left, Migrants & Islam To Marginalise & Demonise Irish Patriots, Their No 1 Threat

THE ENEMY OF MY ENEMY IS MY FRIEND: The fact that this well known strategy is being employed by so called “centrist” governments, exposes their pedigree. They are of the Deep State – the globalist Liberal World Order who are so well experienced in playing the Dialectic (playing one side against the other).

Following the money, we realise the one undeniable fact, which no one can dispute, is that you could count the number of “right wing”, “far right” or “patriotic” NGOs on your one hand. However there are so many Far Left Wing NGOs, all closely aligned with Left Wing parties, it borders on the ridiculous. In fact there are more “anti-racism” NGOs in Ireland than there are actual cases of racism...

Why Are People Too Scared To Vote "Far Right"? How Fine Gael & Fianna Fail Pay The Far Left, Migrants & Islam To Marginalise & Demonise Irish Patriots, Their No 1 Threat

THE ENEMY OF MY ENEMY IS MY FRIEND: The fact that this well known strategy is being employed by so called "centrist" governments, exposes their pedigree. They are of the Deep State - the globalist Lib...
View on Facebook
·Share

Irish Not Wanted! Refugees only need to wait an average of 185 days before getting housing in no borders Ireland! The Irish have to wait up to 7 years on average!

“Mass Immigration is hurting Irish citizens. "Refugees" brought here under the IRPP wait on average 185 days for social housing. The average wait for an Irish citizen is 7 years. Remember this when ...
View on Facebook
·Share

Vote strategically for any other patriotic party or independent and reduce FG & FF’s ability to monopolise Ireland! ... See MoreSee Less

Leo still seems to be living in La La Land as a mainstream newspaper recently put it on their frontpage headlines. Despite the upcoming election, he still ignores normal people who question Fine Gael's record, despite taking the time to listen to her question.

The girl who asked the question, stated on Twitter that she "was trying to have a "civilised" conversation with the Taoiseach but he immediately turned on his heel the moment I mentioned his party's numerous failings and warped priorities".

Even the cameraman Hugh O'Connell, noted that the Taoiseach engaged with the childcare workers, but turned away when she tried to speak to him. Seems to indicate it was all scripted and pre-planned?

How can we trust our country, future and children's future to this callousness?

Leo still seems to be living in La La Land as a mainstream newspaper recently put it on their frontpage headlines. Despite the upcoming election, he still ig...

Irishman banned from Ireland - yet Africans and Asians are welcomed despite crimes...

With friends back in Eire, all those years ago, and with Irish friends abroad (see pics).

It would sure be nice if I could set foot in the Republic of Ireland without having to serve an AUTOMATIC, FIVE-YEAR PRISON SENTENCE, as the GNIB informed me during my March 17, 2011 deportation and life-ban from the Republic. 😔😔😔

It would sure be nice if the Irish people could bring me back to Ireland. Even if it were only a minority. ... See MoreSee Less

When this happens, it's usually because the owner only shared it with a small group of people, changed who can see it or it's been deleted.
View on Facebook
·Share